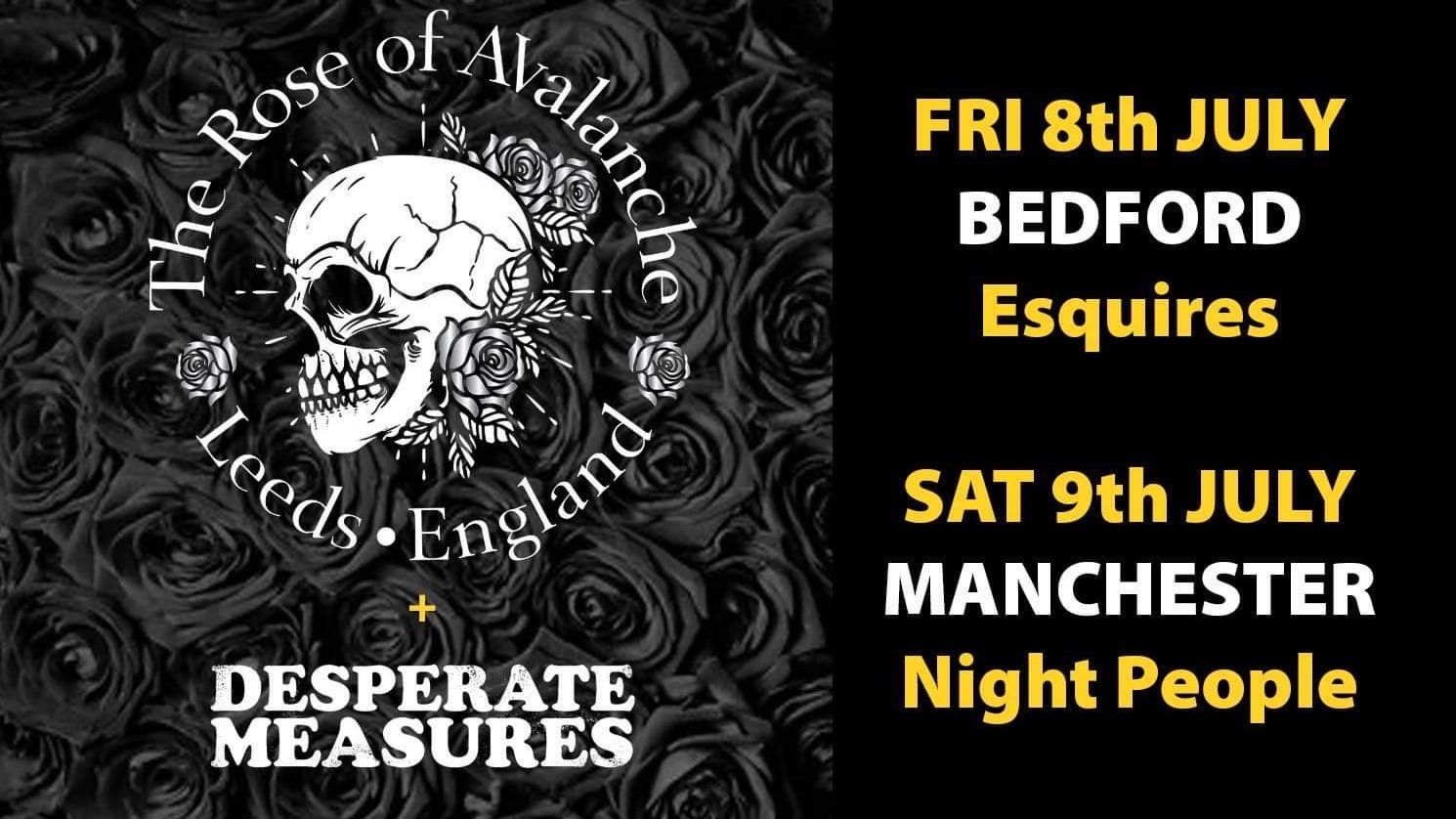 THE ROSE OF AVALANCHE + Desperate Measures

ROSE OF AVALANCHE Biography:Back after a break of more than 25 years, The Rose of Avalanche return with an album of their previously unavailable BBC Radio 1 sessions, and a prestigious support slot on The Mission’s 2022 UK tour.

Formed in Leeds in 1984, the band came to prominence following heavy airplay of their debut single, the “apocalyptic epic” L.A. Rain, by the BBC disc jockey, John Peel. Radio 1 sessions for Peel and Janice Long followed, and L.A. Rain sat proudly at number 26 in Peel’s 1985 Festive Fifty, above songs by The Cure, The Smiths and The Sisters of Mercy.
The band continued to dominate the indie scene of the period, with follow-up singles, Goddess, Too Many Castles in the Sky, Velveteen and Always There, all topping the indie charts. Successful headline tours across the UK and Europe followed along with supporting everyone from Nico to David Bowie.
Magnificently raw, beautiful and loud, The Rose of Avalanche are back to reclaim their rightful place at the top table of alt/goth/rock music.

DESPERATE MEASURES Biography: Four decades after forming the relatively short-lived band Desperate Measures in his native New Zealand, the singer – and noted punk journalist – Eugene Butcher has returned to his first love. Assembling a new team of punk rock avengers including former members of the UK Subs, Done Lying Down and The Glitterati, Eugene and his band have finally released (most of) an album.
Written largely in lockdown, Rinsed froths with pent-up energy and frustration. Scars & Memories kicks things off with a driving groove and bloody licks straight from the Johnny Thunders school of scuzzed-up rock’n’roll. The Rich-Tual (see what they did there?) keeps those energy levels high, with a taut riff and a ‘fuck the system’ theme, complete with big ‘woah-oh’ hooks big enough to land a whale. They certainly know their way around an unruly anthem, but then Flowers At Your Door changes the vibe with an echoing guitar and arch gothic atmosphere that sounds more like The Cult than any Pistols punk stomp.
Lost Angels adds an irresistible sense of hard rocking melody to its live-in-the-studio intensity and harks back to the band’s past, with the six-track mini-album also featuring a more laid-back demo version from 1988. Finally, there’s a cover of Don’t Gimme No Lip Child by ’60s pop star Dave Berry that owes more to the Sex Pistols’ version that cropped up on The Great Rock ‘N’ Roll Swindle. Ultimately, this isn’t a release that is going to change the world, but it is a set of cracking tunes performed with fire, and sometimes that’s enough.
For fans of: UK Subs, The Stooges, New York Dolls