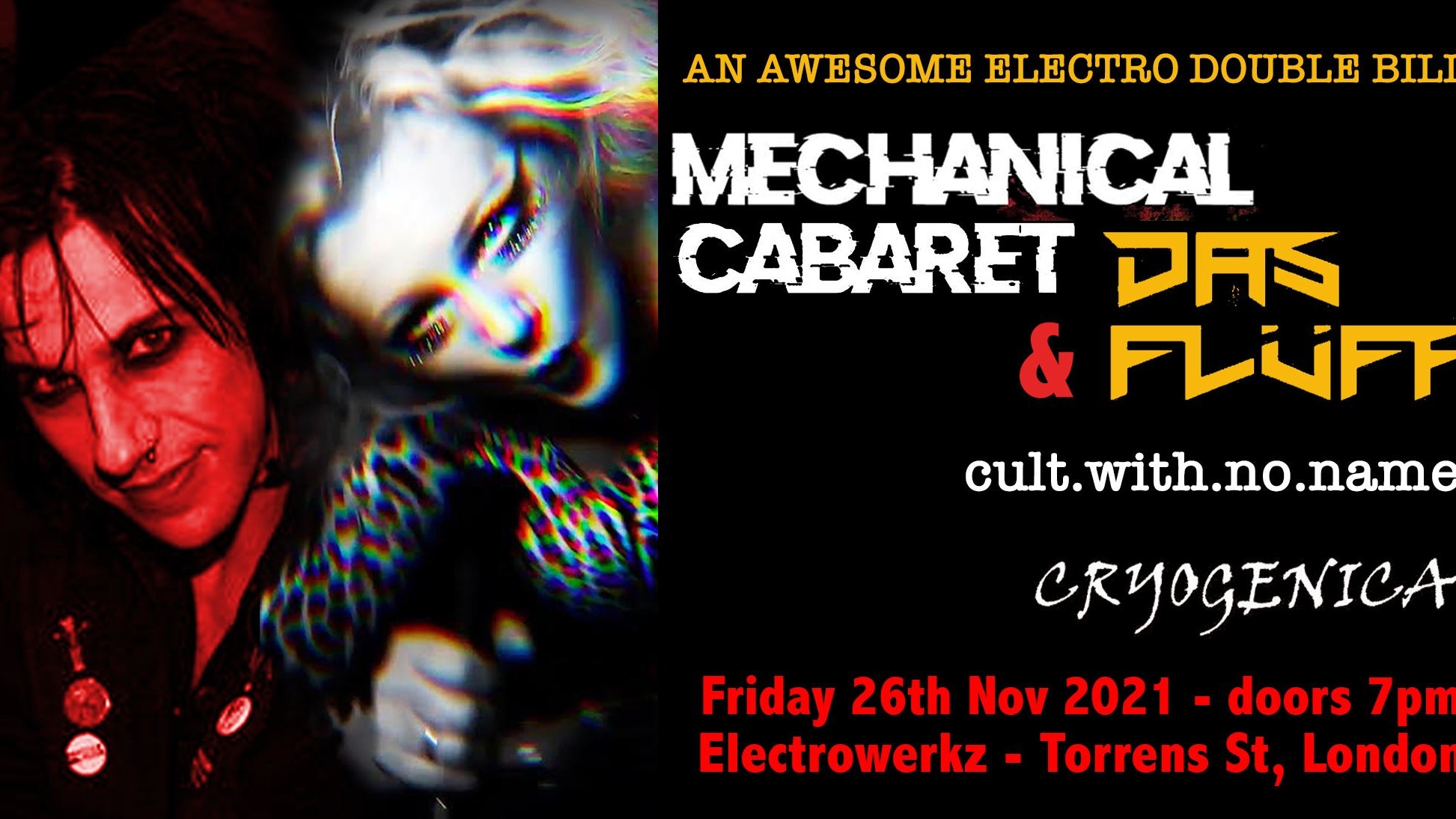 An awesome and filthy electro double headliner with MECHANICAL CABARET and Berlin based Das Fluff! Plus London based CULT WITH NO NAME and CRYOGENICA!

.DAS FLUFF Biography:
Post Punk Electro Filth, Erotic, Avant-garde and mesmerising … ever-changing mood swings, be it doom, punk, sexotic, hypnotic, or “I wanna kick your ass!”
(Ox Fanzine)
Das Fluff have stormed through a prolific decade of touring around the world with headline gigs and releasing 5 albums along with an array of countless critically acclaimed promo videos. The heady combination of Das Fluff’s trademark electronics and blade-like verse activate the adrenaline rush of dance or flight. Das Fluff is the feral spawn of frontwoman Dawn Lintern, the band’s writer and arranger.
Long-time collaborator, Christian Ruland, brings cutting edge creative electronic experimentation to the band’s live sound with ever-evolving combinations of media including theremin, pedals, samplers and Kaoss pads along with his distinctive projections.
Das Fluff have supported post-punk luminaries such as Viv Albertine, Lene Lovich, Toyah, Clan of Xymox and Lydia Lunch and toured extensively in Europe, the US and Asia.
If you danced your hearts out to Trent Reznor’s works and listened to Soft Cell in your bedroom then this is for you.
(Fighting Boredom)
Adding punk edge to the surging beats of Numan and Depeche Mode inspired electro, with a bit of Throbbing Gristle chucked in for good measure.
(hitthefloor.com)
This type of electronica is providing more lyrical and stylistic risk taking which Das Fluff and others such as The Knife and Gary Numan are willing to take.
(musicandotherthings.com)
The deranged love child of Debbie Harry and Freddie Mercury set to the melodies of Goldfrapp.

CULT WITH NO NAME – a biography
London duo Cult With No Name formed in 2004 and have since released 10 albums of atmospheric, dark electro-acoustic alternative music, each fusing elements of Jon Boux’s sweeping piano and strings with Erik Stein’s baritone, and deceptively playfuland dark lyrics. Collaborators include Tuxedomoon,Kelli Ali (ex-Sneaker Pimps), John Ellis (ex-Stranglers), and designer Jonathan Barnbrook, most famous for his Grammy award-winning work with David Bowie.
CWNN’s 2015 project, the soundtrack for the behind the scenes film ‘Blue Velvet Revisited’ with Tuxedomoon and John Foxx (ex-Ultravox), received enormous international acclaim, including from David Lynch himself who chose to premiere the film in Los Angeles. The duo released their 10th album ‘Nights in North Sentinel’ in the August of 2021.

CRYOGENICA Biography:
Cryogenica is a London based alternative rock band with influences such as Curve, Nine Inch Nails and Siouxsie Sioux.
Their music draws inspiration from the goth, industrial, electronic, shoegaze and rock genres whilst also subtly fusing horror movie soundtracks for additional ambiance. Intravenous Magazine described their music as a ‘mix of sensual gothic rock and gritty industrial rock … with a perfect mix of dance friendly grooves and hard guitars’.
Those who are curiously inclined will find them playing at London venues such as Electrowerkz, Hope and Anchor, Nambucca and the Black Heart. In the past they have appeared at Whitby Goth Festival, Gotham, The Dark Mills Festival and Renaissance Festival. They have been lucky enough to share the bill with Alec Empire, The Danse Society, Das Ich, Inertia, Sheep on Drugs, Sigue Sigue Sputnik and, in an act of blatant nepotism, The Ghost of Lemora.
Formed in 2006 as a duo with vocals, guitar and a load of sampling and backing track, they quickly became a trio later in 2007, adding bass to their live sound. Their current line-up consists of a Brit, a Swede, a Dutchman and an Aussie: Jon on guitar; Carina on vocals; Django on drums; and Mikey on bass (with a vacancy for a keyboardist if anyone is interested…).
‘Re-animation’ (2010 album) and ‘From the Shadows’ (2014) was mastered by Reza Udhin (of Inertia) at Cryonica Studiosand distributed by Resurrection Records. Their latest release was their ‘Utopia’ EP in May 2017, currently free to download on their website and Bandcamp (along with other free music). They are currently working on their fourth album which is planned for release in 2022.
http://www.cryogenica.co.uk/ See less