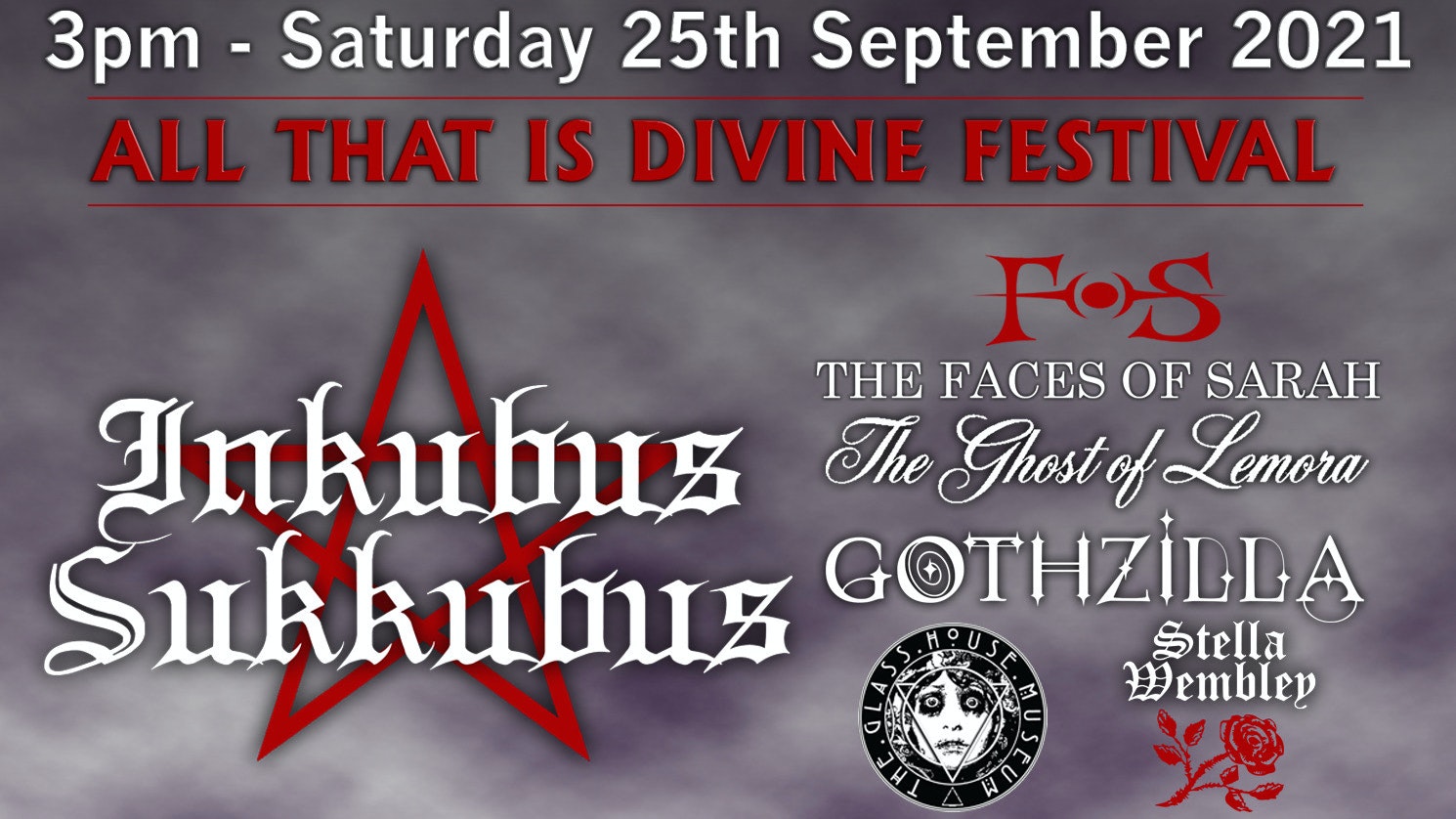 ALL THAT IS DIVINE FESTIVAL – Limites Capacity Event!

The Lounge 666
18+
Share
Buy from Fatsoma
Buy from Ticketweb

INKUBUS SUKKUBUS formed in the summer of 1989, and they have been releasing albums and touring ever since. The band have  released 26 albums and performed live in Mexico, USA, Australia, Russia, Turkey, Scandinavia, UK and most of Europe, they have also appeared on National terrestrial television, in the UK Greece, Germany and Finland.

Inkubus Sukkubus are a Pagan Gothic Rock band with a large international following, and subject matter of their music tends to veer towards the dark and supernatural. The band have recently released their 26th album “The Way of the Witch”

FACES OF SARAH formed in 1999 they have been a constant on the alt/goth rock scene ever since. The music is melodic, vocal power that continues to evolve across the 10 releases to date. The band have missed playing live and are excited to be back with a wide range of live dates to look forward to both in the UK and across Europe in 2021/22″

THE GHOST OF LEMORA will be performing songs from their superb magnum opus Love Can Be Murder. “Indeed, like many a good album you keep coming back to, lend it your time and ears as you will be well rewarded if you like prog, pomp or gothic rock that is a little different.” – GetReadytoROCKRadio

THE GLASS HOUSE MUSEUM is a three piece post-punk / alternative rock band from the West Midlands with a formidable live reputation, having played several gigs and festivals alongside many notable names in the goth scene. Their hard work and dedication over the years has earned them the opening slot for the ‘Tomorrow’s Ghosts’ Festival in Whitby later this year”

GOTHZILLA from Scotland return to the live scene after an enforced hiatus with main man Tim Jarvis being joined by Rain Children guitarist Stuart Harbut for the All That Is Divine festival. The band are excited at finally getting to play new tracks from the acclaimed third Gothzilla album called Auras, released in 2020.

STELLA WEMBLEY takes influences from Depeche Mode, David Bowie and Gary Numan, she is a musician and opera trained singer who graduated with honours in Naples, based in Leeds, she has just released her new single, the cheerfully titled ‘Images Of Death’!

DJ’s
Husband and wife DJ team Dvae and Alixandrea have been running club Sacrilege since 2010 – first in Cambridge, then Norwich, and most recently fortnightly online throughout the pandemic. They love to bring their finest dark alternative tunes to any night they play.