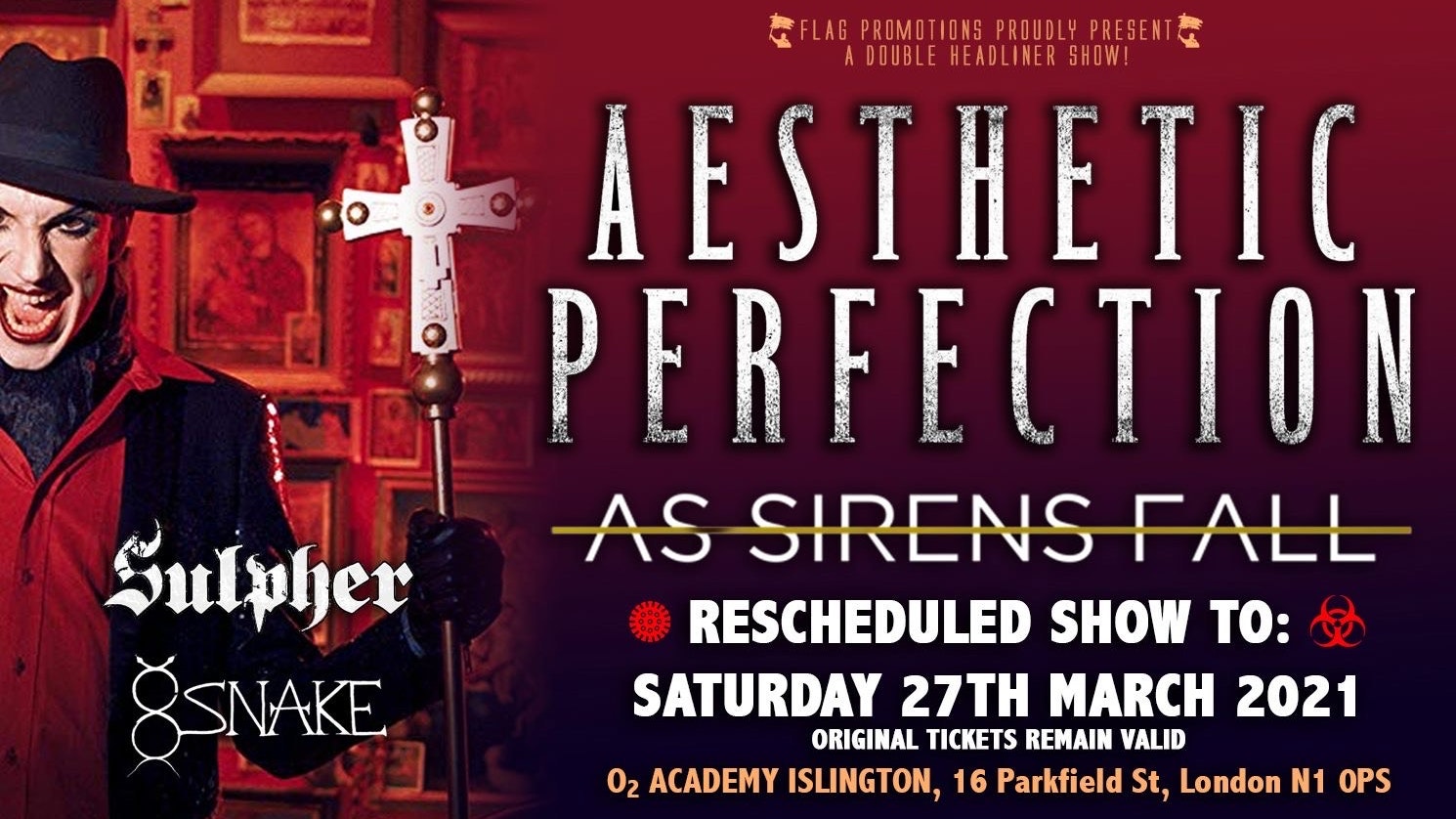 O2 Academy
Under 14’s need adult supervision of someone over 18.
Share

plus support from:
SULPHER
8SNAKE

Following their recent Sell Out London Show and their tour as guests of the mighty LINDEMANN and due to phenomenal demand AESTHETIC PERFECTION bring their unique brand of Industrial Pop once more to the London stage!

This time as a co-headliner with their friends AS SIRENS FALL (see below Biog), along with the ferocious industrial beast that is SULPHER! Featuring guitar legend Rob Holiday ex: The Prodigy, Marilyn Manson, Gary Numan etc.

AS SIRENS FALL Biography:
An eye-catching alt-rock outfit based in West Yorkshire, known for their explosive live shows and die-hard fanbase. Proudly genre-defiant, the ‘aggressive pop’ group have released two EPs, 2016’s ‘The Hospital Party’ and 2018’s ‘Where Lost Things Go’, along with a number of singles. ‘We Go Down Together’ was unleashed in November 2019, supported by their most ambitious, cinematic video yet – and a packed out UK tour with Sumo Cyco.

SULPHER BIOGRAPHY:
After nearly a decade touring the planet as members of The Jesus and Mary Chain, The Prodigy & Marilyn Manson’s live band, Sulpher has regrouped to commit another sonic assault on the nation’s music venues.

Started by multi-instrumentalists Rob Holliday and Monti in the early
part of 2000, Sulpher presents a distinctly gritty style of industrial alternative rock, paying homage to the legendary Nine Inch Nails and Ministry , Deftones and Manson, while mixing the experimental sounds of electronica

Sulpher was hailed in many rock magazines as the genre’s new hope after
the release of its debut single ‘Spray’ in 2002, and as a result secured national
tours with the some of the scene’s biggest and best.

Their Metal Hammer award only heightened interest in the band, and their reputation spread worldwide when their track ‘Fear Me’ was used for the USA 2002 Winter Olympic Games promo ads throughout movie theatres and primetime TV in the states.

The band previously toured throughout Germany in 2003 as special guests of The 69 Eyes and Sisters of Mercy.also appearing at a number of European festivals including wave gothic treffen and Mera Luna swell as a support slot with Marilyn Manson prior to Rob going manson for the 2007/2008 Rape of the world tour

8SNAKE BIOGRAPHY:
Formally Francesco Fonte Band, An progressive Industrial Rock band based in London formed in 2011. Previous releases include the debut album ‘Blue Omens’ (2011) and the EP ‘Arousal Addiction’ (2013). The new album ‘Eight’ was released on NMTCG records on receiving great reviews from the industry, Webzines and Alternative Radio worldwide, they have been compared to the perfect mix of Pink Floyd, Tool, Nine Inch Nails, Nick Cave and The Doors, melded together to come up with their own unique sound. In September 2018 the trio played at Red Roar Festival (UK), they supported Esprit D’Air at a sold out event at the Boston – London and toured Luxembourg and Belgium. Their first show in 2019 was at The Dome – London for Die Kur’s 20th Anniversary, following Renaissance Alternative Music festival at the Electrowerkz – London and Reptile club night – London. Then onto their own European tour ‘Desert And The Moon Light’ In 2019. The same year they supported Diamond Black on their debut single launch in London. They are now working on a new album under their new name 8SNAKE, expanding the scope of sounds that make this band unique. With their next upcoming album they’re planning to tour the UK and Europe.